“ is a found footage horror film written and directed by Orin Peli and produced by Blumhouse Productions and Paramount Studios. The film follows a young couple, Micah and Katie, plagued by paranormal disturbances in their suburban home.

The film opens with Micah (played by Micah Sloat) inside his home fiddling with a new handheld video camera. Living with Micah is his girlfriend Katie (played by Katie Featherstone). We learn that Micah purchased the video camera to capture proof of “paranormal activity” taking place their home.

Given the unpredictability of the strange phenomena, Micah films everything the couple does in their home, never knowing when the next event will strike. During the day the camera captures video of Micah and Katie eating, talking, and going about their normal routine. At night, Micah sets the video camera on a tripod in their bedroom to capture anything out of the ordinary while they are asleep.

Katie tells Micah that she recalls experiencing these strange phenomena since she was eight years old. Further, Katie adds that her sister Kristi (not seen in this film), shared similar experiences.  At first, Micah is intrigued by this seemingly supernatural force and enthusiastically records everything. He is eager to capture evidence proving that what they’re experiencing is real.

As the days wear on, Micah becomes more brazen, verbally taunting the invisible force. Micah’s impertinence crosses the line when he acquires a ouija board to communicate with what they later learn is a demon. Sleep deprived and scared, Katie brings in the services of a paranormal psychic (played by Mark Fredrichs) to help.

The psychic believes that Micah’s recent actions are responsible for fueling the demon’s increasingly threatening behavior. As the occurrences escalate, Micah’s fascination soon turns to terror and as the couple fight for their very survival. The Birth of a Phenomena

Paranormal Activity is the first installment in a six-film franchise spanning a healthy eight-year run before closing with Paranormal Activity 6: The Ghost Dimension (2015). The film is in large part responsible for popularizing the fixed surveillance camera approach to filmmaking that is now commonplace in found footage films.

Prior to the film’s nationwide release, Paranormal Activity went through multiple changes and reshoots. Jason Blum and Paramount Studios were among those with recommended edits. One of the more significant changes to the film includes a new ending which opened up Paranormal Activity to the possibility of sequels.

Paranormal Activity is credited as the first film to popularize movie trailers showing audience reactions and screams captured in the theater as they watch the feature film. These movie trailers were filmed using night vision and handheld cameras, blending nicely with the found footage motif of the feature film. Continuing in the vein of found footage, some Paranormal Activity movie trailers include segments filmed with handheld video cameras showing the audiences filing into the theater.

Pre-release screenings of Paranormal Activity were overwhelmingly positive. During a screening in 2008, audience members left the theater mid-way through the film, claiming they were too scared to continue watching the movie.

With a micro-budget of $15,000, Paranormal Activity still ranks among the most profitable Hollywood films to date. Paranormal Activity enjoyed a nationwide release on October 16, 2009, where the film earned close to $108 million in the domestic market and $194 million worldwide. Paranormal Activity is filmed entirely using a single handheld video camera. Character Micah performs most of the filming, carrying the camera with him wherever he goes. The camerawork comes across as appropriately amateurish, lacking the polished look of a feature film. This approach cinematic technique helps sell the found footage approach of Paranormal Activity.

Paranormal Activity thankfully avoids aggressively shaky cinematography by strategically placing the video camera in fixed locations for the majority of the film. Micah often places the video camera on nearby tables or countertops, offering the stability of a mounted camera.

All of the overnight recordings are filmed from a fixed tripod in Micah and Katie’s bedroom. The overnight footage is intelligently presented in time-lapse mode and slows down to normal speed when something noteworthy happens.

Paranormal Activity does a wonderful job manipulating viewer anticipation and fear. The concept of viewers watching mostly uneventful footage with the possibility that something “may” happen is just as entertaining as the paranormal events themselves. The filming reasons used throughout Paranormal Activity are exceptional. Micah will stop at nothing to capture video evidence of the strange phenomena plaguing his girlfriend Katie. Even at Katie’s behest and pleading to put away the video camera, Micah continues filming. What starts as a fascinating peculiarity for Micah quickly becomes his obsession.

Adding to the strength of the found footage filming reason is Micah’s career as a day trader. Micah works from home and is therefore always around to film. Further, Katie is a college student studying for exams, maximizing her accessibility throughout the twenty-four-day filming period.

One would think that any reasonable person facing this adversity would leave their house to escape. However, we learn from the paranormal psychic that Micah and Katie are not victims of a haunting. The demon is attached to Katie, so leaving the house won’t matter. The demon will follow Katie and Micah wherever they go. This added fact further strengthens the plausibility of an already great filming reason. The unpolished quality of the cinematography comes across as something a layperson would film. Further, the acting of Micah Sloat, Katie Featherstone, and Mark Fredrichs presents as typical people going about their lives. The performances appear natural and appreciatively lack the embellishments of Hollywood acting. In all rights, Paranormal Activity looks and feels like actual found footage. The acting in Paranormal Activity is very good across the board. The performances capture the spirit of what a found footage film should look like without coming across as scripted or overly dramatic.

Katie Featherstone does a wonderful job portraying the emotionally and physically exhausted Katie. Her character is a woman who has spent the balance of her life haunted by an invisible intruder. Katie reaches a breaking point where she is simply too tired to continue fighting.

Micah Sloat (as Micah) does a very good job as the stereotypical male. Driven by his male ego, Micah is erroneously convinced that he knows what’s best for his girlfriend’s well-being. If Micah simply took the time to listen to Kati’s warnings, perhaps the couple wouldn’t be in the situation they ultimately find themselves in – this is one of the tragedy’s of the story.

Mark Fredrichs plays a convincing paranormal psychic. The psychic’s body language and discomfort in the couple’s house lend an eerie feel to the story that something evil has pervaded their home. His inability to help Micah and Katie creates a sense of dread and helplessness for the two main protagonists. At the time of Paranormal Activity’s release, the plot, subject matter, cinematography, and marketing were unique to anything the moviegoing public had previously seen. While by today’s standards Paranormal Activity type films are commonplace, back in 2007, the film was unique.

Paranormal Activity’s success relies on the escalating tension and anticipation the story successfully builds throughout the film.  As bystanders, we can immediately sympathize with Katie, to whom the invisible demon has attached itself to.  Katie can’t run or hide from this unknown assailant. Micah can watch Katie, but is unable to do anything to help.

Since the release of Paranormal Activity in 2007, there were five additional films. Each successive addition to the franchise evolves in cinematic techniques, plot complexity, special effects, and budget. While each film in the franchise has something special to offer the found footage genre, the first Paranormal Activity film is revolutionary for its time, contributing to the genre in meaningful ways unlike any found footage film before it. 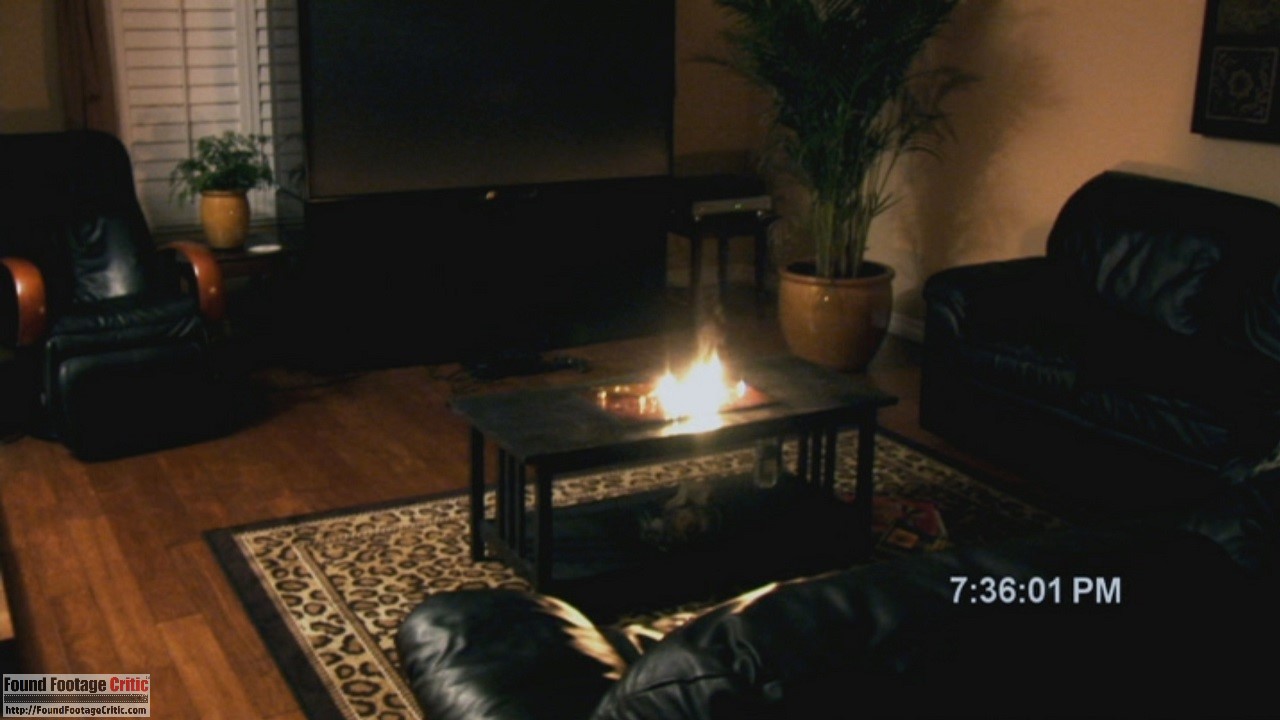 After a young, middle class couple moves into a suburban 'starter' tract house, they become increasingly disturbed by a presence that may or may not be somehow demonic but is certainly most active in the middle of the night. Especially when they sleep. Or try to.